A Song for Bellafortuna: An Italian Historical Fiction Novel 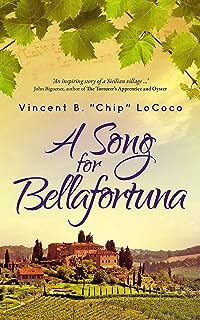 by Vincent B. "Chip" LoCoco

SHORT LIST FINALIST IN THE WILLIAM FAULKNER-WILLIAM WISDOM WRITING COMPETITION
A Song for Bellafortuna is an inspirational Italian Historical Fiction novel concerning a young man’s desire to free his Sicilian village from the domination of one family’s long reign. For years, the beautiful, yet secluded, hilltop village of Bellafortuna, Sicily, was a great producer of wine and olive oil. The entire village prospered. However, after the arrival of the Vasaio family, production dwindles and the villagers soon find themselves in crushing debt to the Vasaios. Only one family in the village remains outside the control of the Vasaios, but the reason haunts Antonio Sanguinetti every day of his life. Antonio is determined to erase this legacy by offering financial and emotional support to his fellow villagers. He introduces them to the choral song from Verdi’s opera, Nabucco, which becomes the rallying cry for the villagers and offers them hope for a better life.

When Antonio’s only son, Giuseppe, discovers his family’s past, he becomes determined to take on the Vasaios and remove them from power. Led by the young Giuseppe, a plan is hatched that could result in either complete freedom for the villagers, or if it fails, forever solidifying the Vasaios’ control.

Find out what happens in A Song for Bellafortuna, a sweeping epic historical fiction tale of love, drama, sacrifice, and redemption, set among the beautiful landscape of Sicily. Already listed by Amazon as a Top New Release in Historical Fiction and Italian Historical Fiction.

The novel has been called lyrical, intelligent, majestic, magical, powerful and compelling. Here are some advance reviews.

Vincent B. LoCoco writes a heartwarming piece of historical fiction . . . He captured the essence of the Sicilian culture, especially regarding the value of ancestry and music . . . A Song For Bellafortuna is a beautiful tale of antiquity."
– Readers Favorite 5 Star Review

"The book was a joy to read. It is a wonderful story, told in a magical way.”
-Cavaliere Ufficiale Aldo Mancusi, President of the Enrico Caruso Museum of America in New York

"An inspiring story of an Italian village threatened by commerce and saved by opera."
-John Biguenet, author of The Torturer’s Apprentice and Oyster